War Museum Overloon "celebrates" 75th anniversary
Today, War Museum Overloon exists 75 years! The museum that opened its doors in 1946 is therefore the oldest World War II museum in Western Europe. Due to Covid-19, the museum is unfortunately still closed to visitors on this memorable day. That is why it was decided to move the celebration of the anniversary to the autumn. On October 14, 1944, the village of Overloon was liberated by the Allies, which makes this date very suitable to commemorate the celebration of the 75th anniversary of the museum.

The celebration of the anniversary has therefore been postponed, but in the meantime there is a lot of work going on. In recent months, a lot of work has been done on a new space for temporary exhibitions and on the construction of a large pavilion in the military hall where air war and freedom are given attention.

When the museum is allowed to reopen its doors on June 9, a new temporary exhibition will be presented to the public. The theme of this brand new exhibition is "Jeep Sensation". For many people, jeeps symbolize the liberation of Europe and are therefore a very accessible and, above all, well-known vehicle. A number of unique beautiful specimens are therefore shown to the public in the exhibition.

The construction of the new pavilion is still in full swing at the reopening of the museum. This space will be taken into use just before the summer holidays.

War belongs in a Museum
This slogan above is still very topical today. Since its founding in 1946, the museum has evolved enormously. From a museum park with ten vehicles and a small visitor area, to a 2-hectare museum with more than 150 vehicles, vessels and aircraft under one roof. A modern multimedia exhibition in which personal stories about the Second World War are central and the museum has also gained a number of successful events (Militracks, Santa Fe & Museum in the dark) that attract many thousands of visitors.

In short; A milestone for the museum today! This event is of course also celebrated on a small scale today with a nice piece of cake for the staff present. 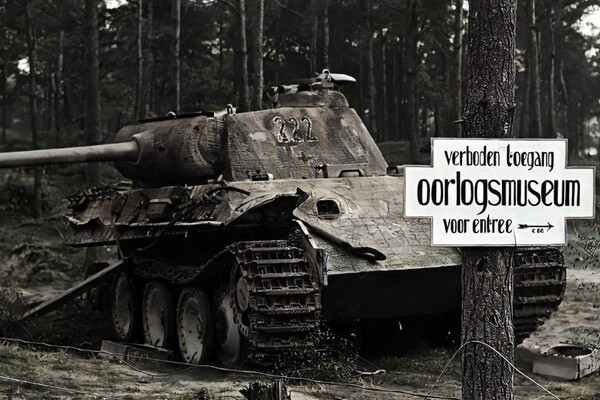