Unique in the world!

In May 2021, a special transport arrived at Overloon War Museum from Glabbeek in Belgium. A British Lancaster bomber that crashed in 1945 was brought in in more than 2000 pieces of wreckage, large and small. On Saturday 26 and Sunday 27 June, the remains of this Lancaster NN775 were placed on a new ramp in the military hall of the museum. This will make the device visible to a large audience.

Laying the wreckage was a big job. Not only because it consists of more than 2000 pieces, but also because it was a device 31 meters wide and 21 meters long. Which part belongs where and how to start? The Plane Hunters Recovery team completed the airplane puzzle in two days. This team was also involved in the excavations of the device in 2016.

To ensure that this mega job runs smoothly and smoothly, the employees and volunteers of the Overloon War Museum have cut and stapled to make the silhouette of the aircraft visible on the ramp with rubber mats. This ensured that the shelves of the aircraft knew exactly where which piece of wreckage was. In addition, the anti-slip layer on the mats ensures that the wreckage remains in place.

The aircraft wreckage has been given on permanent loan to Overloon War Museum by the Municipality of Glabbeek. The remains of the aircraft are exhibited with the nose of the aircraft down. This makes the silhouette of the device easy to recognize for the public. Under the sloping roof, space is provided for an exhibition about the Air War and a special film that will be devoted to 'freedom'.

On March 5, 1945, the NN775 crashed into a swampy meadow in Bunsbeek, Belgium. The aircraft was on its way back from Gelsenkirchen, where it was carrying out an attack on a benzene refinery, when it was hit by German anti-aircraft fire. It crashed and disappeared meters underground. The seven occupants were killed. The device was only excavated in 2016. Three bodies of crew members were also recovered during that excavation. They were given a final resting place at the English cemetery near Leuven.

By making the aircraft visible to a large audience, the story of the crew is further told and their names are not forgotten.

Unique in the world!
Nowhere in the world is an aircraft exhibited in this way. A beautiful tribute to the seven crew members of this Lancaster NN775. 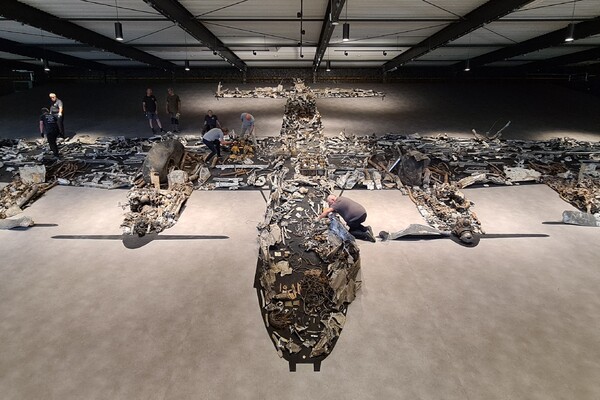 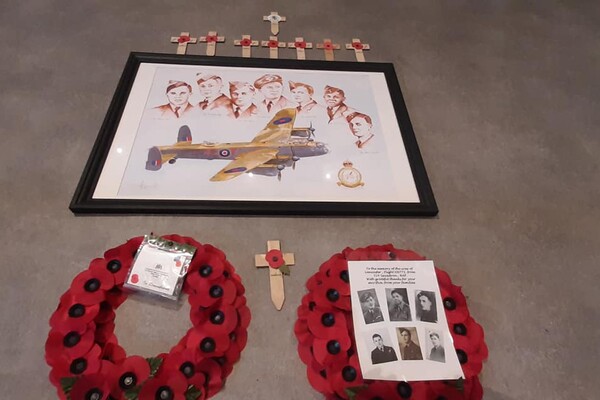