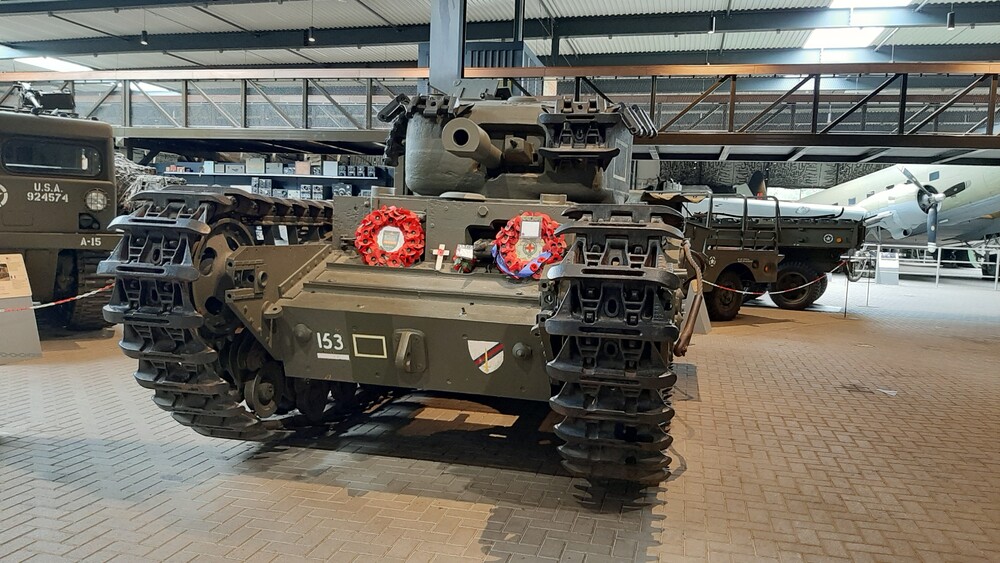 With 'Tiger', 'Jaguar' and 'Rook' this British Churchill tank called 'Jackhal' formed the staff platoon of the 2nd Squadron of the 4th Battalion of the Coldstream Guards, part of the 6th British (Independent) Guards Tank Brigade which supported the infantry attack on Overloon.
The crew consisted of five men. These young boys had been living together since they arrived at the beaches of Normandy (Gold Beach) at the end of June. The tank was their home, they lived, slept, ate, drank and shaved in it. After a fierce journey through France and Belgium they were ordered in October to move to Overloon, a place the boys had never heard of.
Tank driver Bob tells; “Around October 11 we got stuck in a forest somewhere around Overloon and we heard the grenades flying overhead. Then it started. We left on October 12, around noon. We went on and on while we were being heavily shot at. We drove up a road and there was a T-junction. I was told to go left and then right. We were to the right of Overloon. I drove through a hedge and the other tanks followed. There was a large open field with woods to the side. Just outside Overloon. I had no idea that I was driving into a minefield .. ”

The tank hit a mine, crushing the bottom and burning out the tank. The driver, Bob Dare, was slightly injured and managed to retrieve two seriously injured crew members from the tank just in time. The front gunner J. Lambert and the commander J. Garner. The other two comrades in the dome R. Silman and G. Wright were killed. After the war Bob Dare regularly visited the museum to commemorate his fallen comrades. In January 2007 he passed away at the age of 82. Silman and Wright are buried at the War Cemetery in Overloon.